Colors of the Morning Sky 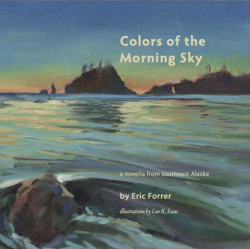 Colors of the Morning Sky

I came to Alaska as a teenager with teacher parents. They were seasoned veterans with seven years in villages on three reservations in the Southwest.  Five of those years were in the same village on the Papago, and it was from there that we moved north.  In those formative years the desert established a wilderness mood in my thinking.  I never came to terms with the urban world, which has its own set of skills and rules that I never really learned.

My parents had introductory and training meetings in Alaska — a few days in Juneau, a few in Anchorage, and a few in Bethel.  Then one morning we got into a hard-done-by Cessna 185 and departed for Alakanuk on the lower Yukon, a station where my parents were to teach for four years.   I remember seeing the Yukon River, flocks of snow geese on the sandbars and the whole river system disappearing over the horizon, thinking – “Count me in.”   I was hooked before we landed and in 55 years that sentiment has never wavered.

I got my primary and high school education by correspondence.   Then from Alakanuk I went to Fairbanks as a freshman at UAF.  I couldn’t make the leap.  A lot of village kids couldn’t make the leap.  The concept of bridging between a bush life and an urban university setting hadn’t been developed.  For a lot of the state’s population it was a huge problem.  In a cross between flunking out and quitting I went out into the big world, edged my way into the blue-collar trades, and thirty-five years later retired as a general contractor with a track record in light commercial and custom residential.  I brought a love for commercial fishing with me from the Yukon and I still keep a hand in fishing in Southeast.

Alaska is broadly egalitarian.  Working with and working for a broad spectrum of people across the state paved the way for governor Steve Cowper to make me one of his so-called idiosyncratic appointments to the universities’ Board of Regents.   My education was checkered, and the Board of Regents was a reach, but I brought a perspective from bush schools and the trades, which is what Governor Cowper wanted.

Alaska made my life, and it saved my life, and I thank my parents every day for their decision to come north.

Colors of the Morning Sky is Eric’s third book.  His first novel was From the Nets of a Salmon Fisherman, Doubleday 1973.  The second is a children’s book, Bucket, McRoy and Blackburn 1985.

Forrer can be reached at forrer.eric@gmail.com.

Lue K. Isaac, a lifelong artist,  spent her childhood at the beach in California, and most of the following fifty years in Seattle, where she raised a family and enjoyed a thirty-year career in residential architecture and interior design.  Having discovered her love for southeast Alaska late in life, she now divides her time between Juneau, Seattle, New Orleans, the sailing vessel eKhaya, and Capetown, South Africa, always with her brushes and easel in tow. Examples of her work can be found at www.lueisaacart.com or at the Juneau Artists Gallery.

Stay in the Loop!