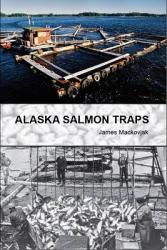 The salmon traps used along Alaska's coast beginning in the late 1800s were among the most efficient fish catching devices the world has ever seen. In a four-month fishing season, a single trap, operated by one or two watchmen, could catch hundreds of thousands or even a million salmon.

For over seventy years, the traps supplied canneries with cheap, live salmon, and for seventy years they were controversial. In an economic model likened to colonialism, the largest slice of the profit pie went south, to cannery owners in the lower 48. Territorial Alaskans howled, but decades passed before Alaska became a state and the traps were outlawed in public waters.

Alaska Salmon Traps is a richly-illustrated history of Alaska’s salmon trap era, including detailed descriptions of the design, construction, and operation of salmon traps. Author James Mackovjak's thoroughly researched and documented text incorporates 48 historical photos and 30 diagrams to bring an almost forgotten technology, and the controversy that surrounded its use, back to life.